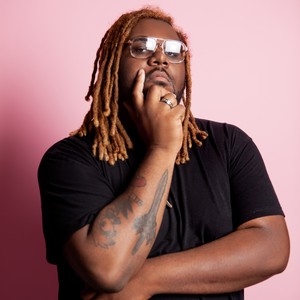 Over the years, he’s worked with a roster of diverse musicians creating soundscapes from smooth RnB to bouncy pop to bass-heavy EDM. As an artist, Rilla Force has performed across the northeast and brought his unique sound to hundreds of fans. His DJ career has also carried him to various international venues.

He is looking forward to introducing the mainstream to his unique sound, increasing his production credits, and continuing to work with a diverse roster of artists. Rilla Force partnered with Gratitude Sound to release his debut album Fiesta, in late 2019.

FIESTA
The project entails a wide scope of influences pulling from South American culture, as well as electronic, RnB, and pop. Fiesta also features fellow MA-based artist’s Latrell James, Lord Felix, and others. This body of work is a testament to Rilla’s complexity as an artist and oozes emotions ranging from superlative glee to utter disdain.

Rilla Force merges the best of future bass, electronic, R&B, and hip-hop to create RNBDM on his debut album "Fiesta"

For Boston-based electronic artist, producer, and self-made musical entrepreneur Rilla Force (Joshua Major-Paschal) the essence of creation is the ability to strip down any musical style into what he connects with most, adding in his own lush vocals, and salting the tracks with vicious sampled beats. Rilla’s kinetic flow and melodic delivery connect with the elastic pulse of bouncing beats on his debut concept album Fiesta (to be released Nov. 1, 2019 on Gratitude Sound Music) to merge the best of future bass, EDM, R&B, and hip-hop into his own signature sound, a subgenre he's coined RNBDM.  Composed, arranged, produced, mixed, and mastered in its entirety by Rilla, the diverse and defining elements of RNBDM are at play throughout the album, from auto-tune inflected blues and R&B choruses to melodic pop, classic breakbeats, South American rhythms, and some free-form production improvisation. “I like really powerful and energetic music, stuff that makes people get up and dance ...or at least, bob their heads really hard,” laughs Rilla. “And those are kind of the core elements of RNBDM, to be able to move people with chord progressions and a little bit of theory, and get them to dance.” The first single, set to drop on Oct. 11th, is the infectiously smooth and street-danceable “Amen” featuring the production chops of the Boston club-scene mainstay at his best. In the opening lines Rilla sings “ I just can't help feeling, everything is right. I can't help but think that, it'll be alright”. The track represents the conquering of one’s fears and overcoming hardships and the track best exemplifies the album’s overall conceptual narrative of the artist traversing a diverse landscape of emotions “ranging from superlative glee to utter disdain” “Corre Conmigo,” which translates to “Run With Me” is a largely instrumental track with a sound that is, at once, experimental and danceable. The song's minimalist vocals are about taking a leap of faith when it comes to engaging someone you are interested in and chasing the thing you want you regardless of who might be affected in the end. “Atone,” with its exultant chord arrangements and spitfire lyrics, speaks to relationships in which the selfishness of both parties stands front and center, to the point of admitting what the chorus states “I want it all, I want involved”. Atone is all about accepting what you want even if it hurts people,” reflects Rilla. “It speaks to the individual who has their cake, devours it, and also wants a piece of what others have as well.” Fiesta also features local Massachusetts artist’s such as the mystery-enshrouded Boston rapper Lord Felix on “Fade” and hip hop producer, rapper, and fellow Gratitude Sound artist Latrell James on “6Boom Cycles”. Over the years Rilla Force has been working hard at developing his production style, collaborating with other like-minded artists, and crafting what would become the new subgenre of R N B D M, which was subsequently the name of his first EP/Mixtape released in 2016. And that hard work has paid off. After uploading RNBDM to Soundcloud and Spotify in December of 2016, Rilla’s track “Swank” got picked up by Triple X’s Fresh Finds playlist. From there, it was a snowball effect when couple big electronic producers, including Calvin Harris, added Rilla Force tracks to their playlists and London-based DJ Complexion started to regularly feature Rilla’s tracks on his popular Future Beats Show. Within a few months, Rilla had enough streaming revenue coming in to quit his day-job as a butcher and focus full-time on making music.  “I always just hear people talking about how the only people who can really make a living on playlists are just people selling millions and millions of records,” says Rilla, “But think the narrative is just being shifted by a new generation of artists.  The people who are saying you can’t make money from streaming, they're superstars, who get paid like $200,000 per show. But then they get paid like, .00039 cents for one stream, and to them, it sounds like chump change. But when you're someone like me, who doesn't have other revenue streams, it adds up. I’ve been proving you can live off it as the everyday up-and coming-artists and I think it's a good way to promote yourself.” It was that very same work ethic and hustle to bypass the old industry gatekeepers and redefine the middle-class musician dream for himself that solidified the connection between Rilla Force and the mission of Gratitude Sound Music. The Boston-based record label is a division of Gratitude Sound which specializes in custom music creation and licensing for advertising and other forms of media. Says Gratitude Sound founder Bryan Hinkley, “My experience with Rilla has been that he is motivated and he’s making it happen. Rilla is a rare example of staying true to oneself while maintaining enough flexibility and freedom to work with practically anyone. That freedom shows in his style. His willingness to try new things is inspiring and I’ve learned a lot from watching him work.”